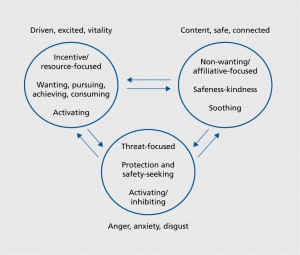 I often share with clients the following illustration of our three most important emotion regulation systems as initially set out by the psychologist Paul Gilbert. This is about as close as we might get, without you or I being neuroscientiests or car mechanics, to understanding what’s going on when we take a peek under the “hood” of our craniums.

You could say that there are three systems in and around which everything we do, feel, think, and dream of takes place. First the moving towards propulsion of the Drive System, with its feelings of wanting, pursuing, achieving, progressing, and focusing.

And finally, the pushing away of the Threat System with its more aversive emotional palette of anger, anxiety, and disgust. 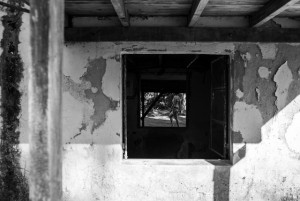 If everything’s running smoothly, the three systems keep our emotions and behaviours evenly weighted. Here I am moving in a resource-driven fashion towards something I need or want, cashing a cheque in the bank for example. I might find whilst doing so, that the line I’m standing in at the bank isn’t moving fast enough (irritation, Threat System activation). I might then soothe myself with a thought or behavioural response along the lines of “It’s OK, you’ve got enough time to hang out here and wait, settle down, breathe, relax, distract yourself by taking out your phone and catching up on some Longform articles.”

Mu, I believe, buzzes mostly around the Drive System, like bees attracted to an ice-cream cone. The ice-cream eater more likely than not will respond with one of the Threat System’s options: anxiety, anger, or disgust. But this also depends on a) how much they’ve been looking forward to an uninterrupted consumption of the sweet treat, b) what level of threat the bees are perceived to pose, and c) if their initial attempts to remove or co-exist with the sting-loaded obstacles results in a workable solution or further distress.

In a sealed and wholly self-directed system, any form of behaviour would be permissible in order to keep us in the blue zone (moving towards, or getting what we want), including gunning down everyone in queue in order to get to the counter faster.

The DSM would diagnose those of us who struggle to do that as narcissists (“Has a very strong sense of entitlement, e.g., unreasonable expectations of especially favourable treatment or automatic compliance with his or her expectations”) or neurotics. But really what should be written in our Diagnostic Statistical Manuals under the majority of mental illnesses is the following: “Has a profound inability to deal effectively with Mu.” 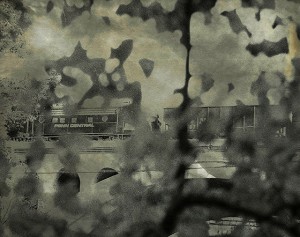 Because Mu is the bee, the queue, and in fact everything and anything which is seen to be standing on the path between us and our manifold biopsychosocial payoffs. Mu is the swarm of bees around your rum raisin ice-cream cone, the little old lady at the bank who wants to chat to the teller, the cloud on the horizon, the twist in the wind, the shit hitting the fan, the tight spot, the spanner in the works, the wheels falling off, the sticky wicket, the stumbling block, the tar baby, the fly in the ointment, the teething problem, the unmitigated disaster, and of course, the grumpy guru or parent shouting at us when we ask them a perfectly reasonable question: “Does my dog have a soul?” excellence.

I say reasonable, but of course the pilgrim’s originating question may have come from any of these three systems.

DRIVE SYSTEM: Does my dog have a soul? [Translation: Can you offer me some kind of interaction in which I can move closer to my spiritual goals?]

THREAT SYSTEM: Does my dog have a soul? [Translation: I’m worried what it might mean if you say he doesn’t.]

SOOTHING SYSTEM: Does my dog have a soul? [Translation: Please help me to feel good about myself and my place in the world with a “Yes”.]

So what is the purpose then of the guru putting a spanner in the works of one of these three systems? Is he trying to strengthen them by introducing a little Mu, which acts initially as a toxin, a barrier to the Drive System, danger for the Threat System, an itch or slap for Soothing.

You could say that this the logic of immunisation: Achilles, dipped into the waters of the River Styx by his  mother Thetis, hoping to confer on him the power of invulnerability? And it does work, apart from the one place where his mother’s caring hand held him firm. Does Mu strike at our Achilles’ heel the way Paris’s poisoned arrow haplessly landed in the one vulnerable spots of that mighty warrior? The implication also here that too much (is there such a thing?) “holding” or “caring”, too firm an attachment to our caregivers might create areas of vulnerability in us which could bring trip us up later. 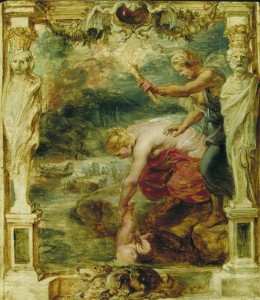 In a painting by Rubens of the scene, it looks as if the child is being daubed in dogs: three-headed Cerberus, one head fearful (Threat), another watchful (Drive), the third sleeping (Soothed), rather than into the river that forms the boundary between us and the underworld. Maybe he would have been better having a dog (or three) at his side, especially near his ankles in the Trojan wars, than Eau de Styx?

So we have a baby or a puppy. And then we have a parent (also dog ‘owner’), and later one of their stand-ins, the guru, the shaman, the priest, the psychotherapist. All of them potentially frustrating figures: their “job” being both to frustrate, as well as tolerate frustration in the act of caring for another.

Psychoanalyst Barry Magid explains how someone like Zhaouzhou achieves this:

“If you think Zen is something lofty and esoteric, the master will give you a shout or slap for an answer. If you think it is abstract, you’ll be told it’s three pounds of flax or the oak tree in the garden. If you think it is beyond words and abstractions, the master may quote the sutras or a poem by Han Shan. If you think Zen is nothing but our everyday life of eating when hungry and sleeping when tired, you’ll be told it’s the dance of a stone boy to a tune played on a flute without holes. Or as one old teacher replied when asked about the original permanent truth of Buddhism, “It just changed.””

But how is this frustration useful to us? Or to those we take responsibility for. Who is this other three-headed Cerberus of Parent, Guru, Therapist (“PG Tips” for short), and why is this question also central to the koan I’ve started to work with called Mu?