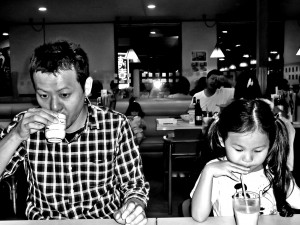 If I use the word “parent”, here and in subsequent sections, to refer to my relationship with Max, is that OK?  For this is how I see myself, acknowledging at the same time all the cross-species small print that comes with this assertion.

I feel myself to be his parent also because I recognise that as soon as I give myself this status, I also place myself in the role of a creature who can frustrate as well as be frustrated by this much smaller, more helpless other-creature that I have chosen to take care of. Perhaps because of this care-taking contract. Perhaps also because of the ways in which I frustrated and was frustrated by my own parents.

To slightly misquote D.W. Winnicott: “The good-enough doggy-daddy starts off with an almost complete adaptation to his puppy’s needs (crate-training, round-the-clock pee-&-poo-watch, the soothing of litter separation anxieties), and as time proceeds, he adapts less and less completely, according to the pup’s growing ability to deal with this failure, and vice-versa.”

My failure could also be seen as engendered by a succession of Mu’s in response to my attempts to control him:

Parent: I need you to distinguish between outside and inside when it comes to defecation and urination.
Puppy: Mu.
Parent: I require you to chew only on those items which I have purchased expressly for your teeth to gnaw on, but no other objects in the house, even those enticingly permeated with my scent.
Puppy: Mu.
Parent: I need you to sleep when I sleep, settle when I sit down to work or read, play only at those points in the day which I deem appropriate for this activity.
Puppy: Mu.

Success in the initial stages of puppy-parenting, or maybe all parenting, depends on how much the parent can remain in Self (calm, loving, resourceful, good-humoured) in the face of this barrage, this hailstorm of puppy-Mu-itude. It also importantly depends, as D.W. Winnicott reminds us, “on the fact of devotion, not on cleverness or intellectual enlightenment”.

Devotion, a kind of surrender, is a word that resonates when I think of our first few weeks together Max. The devoted weighing out of James Wellbeloved Fish ‘n Rice, hypoallergenic, prebiotic dry food; the devoted monitoring of time given to exercise and intellectual stimulation, the devoted stroking and rubbing of your little paws, belly and chest; the devoted kitchen-towelling of “accidents” whilst also encouraging you every hour to step out onto the patio and “be quick”. Which points to another devotion: that of the creation of a shared language, that private, man-dog dialect, into which oppositional Mu comes crashing with jarring regularity.

You could say that it is in these initial Mu’s, that the puppy’s soul first shows itself: a creature separate to me, an inviolable and sui-generis “You”, quite distinct from the owner-dog construct of a bought, secured, possessed “It”.

Mu, challenges this dynamic in a way that often feels like a clash, a power struggle, the combative pitching of one will against another. This is the koan of parenting which we have all been on the receiving end of, and now get to have a go at ourselves, from the other side of the Mu table. What I think I’m starting to realise is that being the Mu-Receiver turns out to be just as perplexing and alarming as being the Mu-Maker.

What to do with Mu?