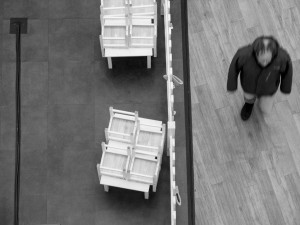 One choice we need to make as Parents/Gurus/Therapists (PG Tips) is to what extent we would like to fashion ourselves on those PG Tips who acted, unwittingly, or deliberately as our models. This transmission seems to follow relatively simple guidelines: if you loved your PG Tips, there will be a high propensity to emulate them either consciously or at a more subliminal level.

Zhaozhou is not really that “radical” in terms of of his guru tics and traits when viewed as part of an intergenerational line. Nanquan has all the badass qualities we admire in Zhaozhou, perhaps even straying at times into sadism with a capital S, as when he cuts a cat in two to prove a pedagogical point.

We see all of the qualities that Zhaozhou will try and emulate from Nanquan, perhaps even reproduce for others, in the koan said to have contributed to his “enlightenment”:

Zhaozhou: The Way—what is it?

Nanquan: It is everyday mind.

Zhaozhou: One should then aim at this, shouldn’t one?

Nanquan: The moment you aim at anything, you have aleady missed it.

Zhaozhou: If I do not aim at it, how can I know the Way?”

Nanquan: The Way has nothing to do with ‘knowing’ or ‘not knowing.’ Knowing is perceiving but blindly. Not knowing is just blankness. If you have already reached the un-aimed-at Way, it is like space: absolutely clear void. You can not force it one way or the other.

Narrator: At that instant Zhaozhou was awakened to the profound meaning. His mind was like the bright full moon.

There is also a deeply relational quality to this teaching, as we see in the following tale:

“One day Nanquan shut the door of his room, scattered ashes around the threshold, and said to the monks, “If you can say it, I will open the door.”

The monks gave many an answer, but none pleased Nanquan. Then Zhaozhou said, “Alas! Alas!”

Yoel Hoffman commenting on this writes:

“Nanquan’s closing himself in the room is not a “problem” that can be solved through an “answer.” If you want your father, just cry “father.” How else can the monks get their master back?”

Zhaozhou, like Nanquan before him, has more time for those who are able to “surrender” emotionally, to talk from the bedrock of anxiety rather than the turrets of philosophy and abstraction in a bid to portray an often illusory sense of distance and safety.

But even Zhaozhou’s “formation” as a PG Tip doesn’t necessarily start just with Nanquan. This stuff is truly intergenerational. Consider “Grandad” in this Zen version of the Addams Family, Nanquan’s pseudo-father/guru, Master Ma, or Mazu, who was one of the first monks to use enlightenment spurs like katsu (sudden shouts), and keisaku (unexpected blows), as well as non-responsive answers to questions, and other unsettling forms of behaviour in his teaching.

And where did Mazu’s somewhat sadistic provocation come from? Well, perhaps he too was creatively fucked up by another Dad, in an old-style hat and coat, who half the time was soppy-stern, and half at his disciples throats. That’s to say: Master Rang, who on seeing his spiritual son Mazu sitting meditating, takes a tile, and sits down on a rock facing him. He then begins to rub the tile on the rock.

“What are you doing,” asks Mazu.

“I’m rubbing the tile to make it a mirror,” replies Rang.

“How can you make mirror by rubbing a tile,” queries Mazu.

“How can you achieve buddhahood by sitting on your arse?” is Rang’s response.

What I think I’m saying is that in matters of influence, originality is much harder to find than we might think.

It’s a bit like discovering, as punk historians Greil Marcus and Jon Savage have shown us, that their revolutionary and radical heroes were actually the impressionable sons of much older radical, punky figures, now stepping forward to adopt the mantel of alternative fathers.

The sons, in time, become fathers, who at best sublimate these early experiences into a form of insight understood as ‘enlightenment’, and then seek to replicate that experience for their own sons.

It is not suprising that Fowles Jnr, burdened as he was as a child by his father’s argumentative, soapbox-philosopher traits, channels these into Guru Conchis. And a little later, as soon as the son has the ear of literary London after publishing two bestselling novels, her writes a very Fowles Sr. project in the form of The Aristos, a somewhat high-minded and even vaguely pompous disquisition on the Age.

Through him, whether he likes it or not, Robert Fowles, lives on.

Just as in many of the stories we know of Zhaozhou, this could equally be Nanquan at work. The son/disciple whether he wants to or not, functions as a kind of proxy for his father, even as he replaces him, adopting his mantle, or trying to.

Nanquan, like Zhaozhou, admonishes his monks to forget about trying to work out why phenomenal existence is fundamentally empty, telling them to “go on a journey” instead. Again and again, we find him refusing to go abstract, to philosophize and teach through concepts.

Zhaozhou said, “If I cannot cure my own disease, how could I cure those of others?”
The monk said, “Then there is no one I can rely upon. What should I do?”
Zhaozhou said, “If you rely upon me, tread heavily upon the earth. If you do not, go east, west—go wherever you please.”

To which translator Yoel Hoffman adds the note: So essentially he’s saying ‘Trust me but save yourself’.

He also refuses to privilege human experience above other life forms:

Someone asked, “What is my self?”
Zhaozhou said, “The oak tree in the front yard. Look at it.”

And perhaps even more vociferously than Nanquan, often with the stand-up comedian’s pomposity-puncturing acerbity and willingness to take language into the toilet (a Zen Frankie Boyle?) he lays into his disciples, sycophants, fawners, flunkeys, yes-men, and every pat-on-the-back-seeking son and daughter looking for validation and accord with punk-like vigour:

Someone said, “I have come here from far away. I beg you to teach me.”
Zhaozhou said, “You have just entered the gate. Well then, let me spit in your face.”

A monk asked, “To be holy—what is it like?”
Zhaozhou said, “To dump a mountain of shit on the clean plain.” The monk said, “Master, make this clear for me.”
Zhaozhou said, “Stop fucking with my head.”

In the end though, all is saved, if saving is required (I think it is) by that trait which he also shares with Nanquan, and our finest stand-up-comedians and PGTips, a kind of wounded, even petulant vulnerability, delicate as that easily punctured fontanelle behind all the tough-talking wisecracks:

A monk came to Zhaozhou for an interview. When he saw Zhaozhou sitting there with his robe pulled over his head, the monk immediately turned to leave.
Zhaozhou said, “Don’t say I didn’t receive you.