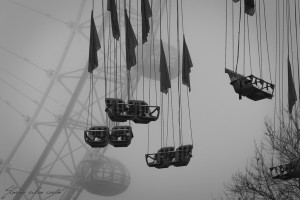 The dilemma of Mu, the koan of Mu, is that when you take it to heart, when you make it your own, it no longer feels like an indifferent, bureaucratic barricade, an abstraction from an old book. Rather it is now  experienced as all-too personal and personally offensive obstruction.

As in when you turn to the beloved, or a parent, or a therapist, or your guru with a question. This question might be a straightforward one, or something more implicit : am I lovable, do you value me, can you see something in me which I still fail to see in myself? You turn to this hopefully-trustworthy figure, present your question and wait for their reply. Maybe you are seeking a kiss, a caress, a compliment, a hug, some kind of validation. Perhaps you have yet to know what it’s like to expect this, you can’t even trust the expectation, let alone the person you expect it from. Perhaps your expectation is wholly narcissistic. Whatever it is, you turn to this person because although you can dialogue with yourself, you can’t get an answer in the way that you can from another. So you take a relational risk.

And sometimes what you get back is something that feels more like a slap than an affirmative caress, a pinch, a punch, a jab, a thwack, abrasively unexpected. Is this Mu? Is that how that “no” felt from Zhaouzhou to the pilgrim, like a slap to the face of all his existential certainities?

The psychologist Russ Harris calls these events reality slaps: “moments when life suddenly deals us a painful blow. It’s a shock, and it hurts, and it knocks us off balance; we struggle to stay on our feet, and sometimes we fall”.

The reality slap, he goes on to explain, takes many different forms:

“Sometimes it’s so violent, it’s more like a punch: the death of a loved one, a serious illness or injury, a freak accident, a violent crime, a disabled child, bankruptcy, betrayal, fire, flood or disaster. At other times the slap is somewhat gentler: that sudden flash of envy when we realise someone else has got what we want; those sharp pangs of loneliness when we realise how disconnected we are from others; that burst of anger or resentment over some sort of mistreatment; those short, sharp shocks when we catch sight of our reflection and we don’t like what we see; those painful stabs of failure, disappointment or rejection.”

The problem is not just with the reality slap, but the reality gap, where on the one side we see the reality we want (a satisfying answer to our question, or maybe a nurturing positive response from our attachment figures), and on the other side, the reality we have:

“And the bigger the gap between those two realities, the more painful the feelings that will arise: envy, jealousy, fear, disappointment, shock, grief, sadness, anger, anxiety, outrage, dread, guilt, resentment; perhaps even hatred, despair or disgust. And, whereas the slap is usually over quickly, the gap can persist for days, weeks, months, years and even decades.”

Or in the case of Mu, maybe even centuries.

So what does one do with this slap? Broadly speaking, you either grow or retreat I guess. Grow as in split open like one of the Cosse Violette bean seeds I plant each year in warm, moist compost. Maybe we too can grow in this way too, becoming more fully human: a beanstalk with blossoms and tasty vegetables, where before there was just a hard seed.

Or we recoil, cower, try and defend ourselves. This  is human too.

The former requires us to take on the conscious self-talk of: all outcomes are achievements, all answers valid, no such thing as failure, only feedback. Or in the the less chipper phrasing of Samuel Beckett in Worstward Ho: “All of old. Nothing else ever. Ever tried. Ever failed. No matter. Try again. Fail again. Fail better.”

The place where these cognitions reside, is a place from which there is no way out and to which there is no way in, a kind of corporeal koan-processor, the prefrontal cortex (the PFC). It is a place of reassurance and reason, a place we need to return to after the sting of Mu has activated all of our threat systems, lower down in the limbic system of the brain, that emotionally sensitive jelly which shakes and wobbles and trembles and generally freaks out, like some seismic shaking of a once gentle ocean, even when set off by a single obstructive syllable such as Mu.

So far, I have imagined Zhaouzhou delivering his slap (Mu) to the pilgrim, and then abandoning him with it, leaving him alone, unguided and helpless to wrestle with the demon of entropy. The way Conchis abandons Nicholas in The Magus after having delivered his series of reality slaps.

But perhaps they continued to sit with Zhaouzhou’s intervention, the way myself and a client sit after I have said something Mu-like to them in response to their existential quandary, which is also often a kind of question or riddle. Perhaps the slap was only the beginning of the process, and by staying with the pilgrim they worked through the reality slap and gap together, with Zhaozhou continuing to provide a kind of anchor, a cognitive scaffolding, inside which the Pilgrim’s own wisdom might develop, his own making sense, or making peace with Mu.

The good PG Tip (Parent, Guru, Therapist) you might say doesn’t just deliver a slap and then send you to your room. Or write an email, and then not respond to your response, but rather uses the slap, the Mu, as a way to mindfully grab hold of your attention, to open a door, through which you both walk and explore the room (your heart and mindspace) and its psychic contents with care and curiosity.

So maybe Mu is more like a leash, or a halter than a slap, into which we surrender something to another?

As Max and I do for each other at the moment, where every walk around the block is still a show-down between Yes and No, between push and pull.