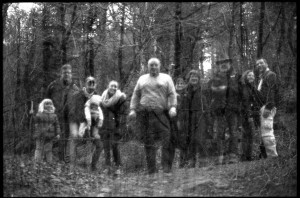 There is an argument to be made that poor distress tolerance lies at the heart of all our mental and physical suffering, as well as all the disruptive or hurtful behaviours that manifest from this, which all too often stem from some form of anger-tinged emotion: resentment, impatience, enmity, exasperation, blame, jealousy, provocation, and also detachment and numbness, those emotional overdrive states, the fuse literally blown.

One of my clients has a bona-fide Mu phobia – although I think we all do, it’s just a case of finding your’s. His is easier to conceptualise, presenting itself as a common, everyday substance: mu(d).  As with specific phobias, it’s not just any mud, but dark black mud that might have an almost oily sheen, which upsets him.

Tony might be confronted by this anxiety-provoker in an advertising campaign for a fundraising event (“Pretty Muddy ® – Cancer Plays Dirty, But So Can We!”): six women wearing jogging gear and pink Cancer Research UK tops, sliding down a mud-chute, holding hands. Or maybe the mu(d) hits his screen in a BBC Dickens’ adaptation, Magwitch and Compeyson, trying to drown the other in the muddy waters of the Thames marshes. Or a YouTube video of a group of children having a mud fight in their garden.

However it arises, Tony, a man in his sixties recoils in abject horror and disgust. It is as if he is a very young a child being forced to witness his parents raped and tortured at the hands of armed guerilla. It really cannot be overstated how deep this fear of mu(d) goes. Imagine the dearest person or animal in your life, and now imagine them being humiliatingly brutalised with the knowledge that after they’ve finally given up the ghost, you’re going to get it next. Your demise will not be swift, or painless, and it will certainly not be anything but intensely shameful. Such is Tony’s aversion to mu(d).

So perhaps no surprise that that one reliable response for his feeling of total powerlessness is Tony’s own version of the Incredible Hulk, which steps in to scathingly rebuke everyone involved in the atrocity of this mu-niverse: the television executives who greenlighted the script in which the muddy scene had been plotted; the sick directors and actors who filmed it all; the perverts who on a monthly basis wade through 5k of mud for charity and then post their exploits on Facebook, Twitter, Instagram.  Hateful, hateful, hateful muddy hmuanity. Surely someone has to pay for the torment he’s been put through?

The fat Diagnostic Statistics Manuals sitting on every psychiatrist and psychologist’s virtual and physical desktop, might give us like the fabled (and probably apocryphal) Inuit example of having multiple terms for snow, 300 or more ways to describe our tormented snowflakes. One of Tony’s psychiatrists diagnosed him a few years ago with Natural Environment Phobia Disorder. Another, felt that Specific Phobia (DSM-5 300.29) might be more the ticket, having completed his box-tick exercise on the following checklist of symptoms:

Whatever you call it we all accept that snow is water vapour in a freezing atmosphere. Likewise, icy suffering I’m stating with equal forthrightness, and the attendant fight (anger), flight (avoidance), freeze (depression) responses to suffering, is at its core an efflorescence of anxiety provoked by some kind of Mu but without the means (actual or perceived) to tolerate it.