“Once upon a time,” begins 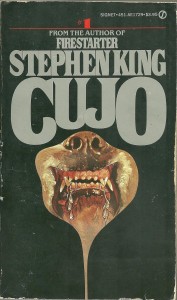 a novel about a psychotically angry dog called Cujo, “a monster came to the small town of Castle Rock, Maine.”

We expect the storyteller (Stephen King) to be referring here to Cujo, whose slavering muzzle and bared teeth we’ve just been looking at on the cover of the 1982, New American/Signet paperback edition, a book our 11 year-old self bought with his pocket money from the second-hand bookstore next to the video shop in the suburb of Benoni, South Africa.

The cover, created by the illustrator and artist Don Brautigam, who also designed the album covers for Metallica, doesn’t show the entire face of the dog we are to meet a few pages later, the dog who patiently allows Vic Trentor’s 4 year-old son, Tad, to insert his hands and then face “into Cujo’s mouth…peering in like the world’s smallest dentist”. Rather Brautigam gives us a blob-like silhouette of a less-familiar creature through which only part of an animal can be made out, so that the dog’s nose looks as if it’s two empty eyes, the mouth and teeth taking the place of where we might expect “the monster’s” waist and belly to be.

Seen in this way, we’re primed for some kind of encounter with a thoroughly uncanny creature, an embodiment of Freud’s unheimlich: those internal, repressed bad, angry, persecutory feelings projected outwards, into something or someone hair-raisingly “other”; something both strangely familiar to us (being always part of us), but also disquietingly unfamiliar in its threatening externality.

King, the master of foreshadowing is not we soon learn referring to Cujo in these initial lines about the monster who came to town, no, “not werewolf, vampire, ghoul, or unnameable creature from the enchanted forest or from the snowy wastes” but rather “a cop named Frank Dodd with mental and sexual problems.”

I think King starts with Dodd (the word so close to Dead) because in humans we might say the line between willed and instinctive action is more blurred than it is in animals. Cujo, like Dodd, will in the 432 pages that follow, also go on a killing rampage, but unlike Dodd, we might struggle to assign words like malicious, or wicked to his actions, as they arise from an impairment to his social functioning due to rabies (from the Latin for anger, fury) rather than as an outcome of poor impulse control.

Cujo’s fury, his rabies, is thus more of a Mu-like phenomenon than anything else. The point at which he gets infected even has a kind of curious riddling koan quality to it instilled by King’s use of the word “question mark” in his description of the fatal moment: “The bat slashed and bit at him, slicing open the skin of the dog’s sensitive muzzle in a long, curving wound that was shaped like a question mark.”

But his fury also acts in the narrative as a pressure valve, an unleashing of all the frustrations and anxieties of the human bipeds whose complicated social and sexual lives are braided in a snarled and tangled manner around him: marital discord, betrayals, domestic abuse; financial and creative disappointments.

The fury of rabies feels more monstrous, more horrific than other forms of anger, because it is closer to an unconscious process, with its implication of unconstrained, uncontrollable, anarchic drives. These drives are horrifying (this is a horror novel) probably because we recognise that our frustration and anger has something of the Cujo to it.

And it has. The first two stages of any angry episode (activation, and modulation) occur almost instantaneously. Modulation here does not indicate tempering but rather inflating, pumping us up with Hulk-juice, adrenaline and noradrenaline, that surging, shirt-ripping, primal-roar of our fight-flight neurochemical cocktail. The anger party all goes on as a kind of neurological speakeasy, under the radar of consciousness. It has to work like this in order for anger to do its job as a protective, life-saving response to situations that might have been genuinely life-threatening once, or else a maladaptive hampering of our freedom.

At a brain level, like in the Frost poem, two roads really do diverge in a yellow wood, or in this case, an angry mood. The brain appears to have two distinct but overlapping pathways to defensive aggression, the first an unconscious route, which takes less than half a second to activate. You might see this as the flick-to-the-ear-of-a-rabid-dog, which BOOM, generates the equivalent of instant, instinctively defensive aggression, no thinking required. The other route takes forever in brain-terms, two to three seconds, to reach the more reflective, reasoning parts of our neural wetware. 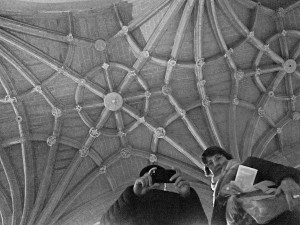 Here’s a further breakdown of the neurodynamics of these two distinct subcortical circuits.

It begins with our sensory organs gathering information on possible threats or barriers; the thalamus then organizes this data, transmitting its findings to the medial amygdala which makes a call based on perceived level of threat. If we have a somewhat sensitive and twitchy amygdala, like a fire alarm in your house that goes off when you’re boiling the kettle, you can see how the defensive response might lead more often than not, quite literally to a storm in a teacup, or rather a puppy or child getting a walloping for simply being infants.

I’m pretty sure I have a seriously twitchy amygdala. Writing this in the garden on a Saturday morning, even though completely taken by the screen before me, my peripheral vision picks up the movement of a small, 2 cm, mouse behind a flowerpot, and at the very same moment, my vocal cords, in the form of a yelp are already sounding the alarm). Were it a different threat, a different place and time, I might angrily be reaching for a weapon to protect myself, shooting first, asking questions later.

It is from the amygdala, that these two pathways, both carrying messages that suggest the possibility of threat diverge. Neuroscientist Jaak Panksepp calls these our RAGE circuits. One goes the quick route from the medial areas of the amygdala (the fire-alarm), through the discrete zones of the hypothalamus and periaquaductal gray of the midbrain, which then provide links from our nervous system, our threat-coder, to the endocrine system. It is this system that acts as anxiety-focused drug dealer, dispensing hormones and chemical substances to help modulate our inner worlds.

The other message goes the long-route, north, to the frontal cortex and hippocampus which are able to provide a more discriminating and solicitous response to whatever might be bugging us.

Another way of thinking about this is the difference between attacks or threats posted on Twitter versus the same data being analysed a few days later in a New York Times or Guardian feature, or even later by academics for a journal article. One reliably leads to defensive OMG-lets-bomb-them reactivity. The other is able to consider all the variables at work before suggesting possible avenues to explore and consider.

The tricky question, a kind of koan in itself, is how do we “tame”, or subdue our inner Cujos, those parts of us that have no interest in reading the Op-Ed or journal articles? How do we intercede with those raging, Hulk or Lear-like aspects of ourselves, when we know that the most carefully worded and compassionate intercession from a good friend (Kent) or even a cherished daughter (Cordelia) is liable to fall on angry deaf ears?