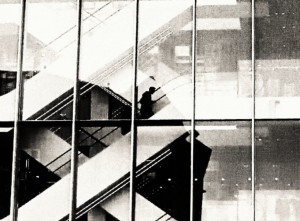 Mu also rears its head again and again within our most committed relationships, where we’ve already won the “prize”, someone to love who also loves us, but still our obscure relational needs (often as obscure to us as to the other person) seem to point at some kind of existential deprivation which we struggle to communicate to the very person we’re most intimate with.

Every Monday, at 6pm, a couple (let’s call them Rakim and Susanna) enlist me to play a role in a  relational psychodrama on the theme of deprivation and defence.

It’s made even more tricky because the couple don’t have a shared script they’re working from. Although I have never played chess, I can only liken it to those grandmasters who take on a room full of cocky aspirants, darting from one chessboard to the next, making split-second decisions for each game, cognitive shifting capacity at the max. Or that moment in a Bruce Lee film where our hero is surrounded by a gang of thugs, and needs to take them on all at once: fists darting out here and there, a kick to the groin, a well-timed swerve or dip; balletic mayhem at its finest.

The only game in town, the only script in couples therapy,  is “Who’s Right”, a script or game involving a series of stratagems and gambits utilising punishment, reward, shame, guilt-induction, duty and obligation. I must present to them the relationship koan of Mu. How can we tune into our needs and make requests based on these needs without resorting to the criticism, defensiveness, contempt and stonewalling?

And what of the scripts I play out in my own relationship? Undoubtedly variants on theirs. The one where I accuse my partner of haranguing me from her podium, while I sit in the lecture theatre, cut-off, or in a state of conversational claustrophobia, where meaningful exchange is rare, but recitation all too common.