If you’ve seen the film 127 Hours or read the book, as I did a few nights back, you will know by now, that after three days drinking his own urine, feeling it erode the roof of his mouth, his trapped arm beginning to decay, attempting now and again to chip away at the huge boulder pinning him down, Aron ultimately resigns himself to his fate. He is going to die. But even then, the frustration of his situation once more triggers a visceral, animal-like fits of pique, the sort of thing you would expect from a dog or a fox with its leg caught in a bear-trap:

“I thrash myself forward and back, side to side, up and down, down and up. I scream out in pure hate, shrieking as I batter my body to and fro against the canyon walls, losing every bit of composure that I’ve struggled so intensely to maintain.”

It is at this moment in the story, the “pure hatred” perhaps as I’ve already suggested prises open an opportunity that our civilised rational neocortex isn’t designed to help us with. For it is at this moment in which he flails about the unbudging grip of the chockstone, that Aron feels his arm bending in an unnatural, torqued manner and a kind of epiphany comes to him:

“If I torque my arm far enough, I can break my forearm bones. Like bending a two-by-four held in a table vise, I can bow my entire goddamn arm until it snaps in two!”

The description that follows, both the breaking of his own arm, and then the sawing through of skin, muscle fiber, tendons, ligaments, veins, nerves, and jagged bone, makes for a harrowing read, but eventually, with him reliving the deed on the page, me visibly squirming on the sofa as I read, we both get to this moment:

“It is 11:32 A.M., Thursday, May 1, 2003. For the second time in my life, I am being born. This time I am being delivered from the canyon’s pink womb, where I have been incubating. This time I am a grown adult, and I understand the significance and power of this birth as none of us can when it happens the first time. The value of my family, my friends, and my passions well up a heaving rush of energy that is like the burst I get approaching a hard-earned summit, multiplied by ten thousand. Pulling tight the remaining connective tissues of my arm, I rock the knife against the wall, and the final thin strand of flesh tears loose; tensile force rips the skin apart more than the blade cuts it.

A crystalline moment shatters, and the world is a different place. Where there was confinement, now there is release. Recoiling from my sudden liberation, my left arm flings downcanyon, opening my shoulders to the south, and I fall back against the northern wall of the canyon, my mind surfing on euphoria. As I stare at the wall where not twelve hours ago  etched “RIP OCT 75 ARON APR 03,” a voice shouts in my head: I AM FREE!”

It is not surprising that this language of freedom is also used by people who have been able to find new, maybe at times painful, but also quite often creative ways out of their existential, Mu-like predicaments, whatever stumbling blocks or impediment that life might have seemed to have pinned to the ground with. Susanna and Rakim unable to emotionally feed each other any more. Tony: unable or unwilling to accept the limits that others impose on her needs and desires. And me, writing sometimes into a space of meaning and interest, and other times into the pitiless void.

Entrapment it seems is the tight corners our defensive Protectors and Inner Managers that we have backed into, one way or another. May we also need to accept at some point, as we angrily flail away at our own Mu-boulder, that to break free from our well-established, habitual psychology might require, at times, a somewhat radical “operation”.

Something essential (your own right hand) in its utility and importance may need to be left behind or extricated from. Or maybe kept, but radically transformed, with the willingness to utilise our inner and outer hands differently.

Ralston still has a useful appendage extending from his lower right forearm, even though it does not have the same tactile feedback of a flesh-and-blood hand. But with it, he can still climb and walk, and continue to thrive. Metaphorically speaking, the hand he sawed away was perhaps the grasping hand of Taṇhā, as Zhaozhou might call it (which translates as “thirsting, craving, or longing”), the very foundation of his/our suffering. Which is to say: our fantasy wishes, our desire for things to be other than what they are, our struggle to accept some of the limits and frames of our lives, the bodies and minds into which are born and live. 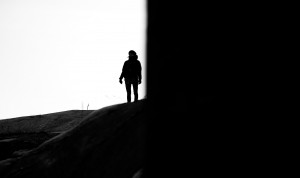 Freedom is not then to escape these limits and frames, but find a way to exist more peacefully within them. Freedom is not necessarily to know (whatever that would mean) whether dogs have souls but to live in harmony with our own sense of soul and that which we perceive as present in our two and four-legged friends.

“Where did the self-pity come from?” reflects Patty Berglund, in her autobiography cemented halfway through Jonathan Franzen’s novel Freedom. “The inordinate volume of it?” she continues to marvel. “By almost any standard, she led a luxurious life. She had all day every day to figure out some decent and satisfying way to live, and yet all she ever seemed to get for all her choices and all her freedom was more miserable. The autobiographer is almost forced to the conclusion that she pitied herself for being so free.”

Do we share that self-pitying Freedom, Patty and I? And if so, what to do about it?

Later in the novel, the omniscient narrator notes that “the personality susceptible to the dream of limitless freedom is a personality also prone, should the dream ever sour, to misanthropy and rage.” To be free as a bird is an empty metaphor when even birds are losing their freedom.”

USE WELL THY FREEDOM is the phrase engraved on a stone outside the main college building where Patty’s daughter Jessica is showing her Mom around.

Perhaps we are all positioned in some way between these two poles: the illusion of limitless freedom, and the delusion of self-pity. SOS, we cry. Save our souls. But how? Any ideas?

Here are some suggestions from Max and Zhaozhou.