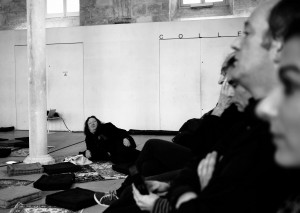 There is a moment in Shozan Haubner’s Zen Confidential: Confessions of a Wayward Monk which has stayed with me ever since I read it sometime this year. Haubner is living in the Mount Baldy Monastery in Los Angeles, presided over by the head abbot Kyozan Joshu Sasaki. One day, Haubner writes of himself distractedly, half-heartedly playing his part in a dress-rehearsal for the Jodo-e ceremony in honor of the Buddha’s enlightenment which is to take place the following day. Pootling through the proceedings, the following incident occurs:

“I was studying the bloody end of a cuticle I’d been nervously gnawing all week when I looked up and saw my teacher staring straight at me—straight through me. He was at the top of the bowing mat, squared off in front of the altar, looking very samurai, his hands passing just over his heart, that invisible sword. Behind me was the Buddha statue he was ostensibly addressing with his momentum-gathering gestures. He looked ever so slightly past me to it. And so I saw how he sees the Buddha.

I have never been looked at this way in my entire life. It took me completely off guard. Have you ever been fixed with a gaze of total love that was not a smile? He was, in fact, utterly expressionless. How do these Zen masters do it? I thought. Catch you so off guard with something so simple?

I watched him find his balance at the top of the bowing mat; I watched him extend those tiny, withered hands, the fingerprints worn smooth, out in front of him; I watched him open his arms and widen them in a looping circle, hands meeting at the palms in a prayer gesture or gassho.

For that’s exactly what he did. He took the whole universe into his frail gray arms and brought it back into his chest like a great samurai sheathing his sword, unlocking for me in a single phrase and motion what had for nearly a decade been a largely meaningless gesture, repeated by rote, day upon day. “Turning Japanese”—aping the customs and rituals of a spiritual tradition so foreign to me—didn’t seem like such a bad thing now. Watching my teacher in action, it hit me all at once what a tremendous container the rituals and customs are for a truly enlightened mind and what a profound opportunity they afford for a cathartic gathering and releasing of group anxieties and energies.”

I’ve yet to experience something like this with my gurus, fathers, and therapists, but where I do recognise it, this Gaze of Total Love, this sense of whole-world-including-me-taken-into-your-arms, unconditional positive regard is in the eyes of Max. As he greets me when I walk back into a room in which he’s been sitting or lying, in our shared enjoyment of a game, when he snuggles down next to me on the sofa, or on the bed, positioning his backside so as to be as close as possible, connected, united, soulfused.

Monty Don sums up the dynamics of this very special relationship in his memoir about his soulmate Nigel:

“We all love the way that our pet dogs show us unbiased, non-judgemental affection. When we are fed up, distressed, grumpy, or even have behaved badly and done something we know to be wrong, our dogs still love us. But Nigel has the rare gift of taking our love and making us feel enriched and enlarged by doing so. It is not what he gives back to us so much as what he allows us to give to him. The wrapped dog biscuits and soft toys that are sent to him or handed to me in trust to pass on to him are more than just treats. They are symbols of the love that he has empowered us to feel.”

Dogs empower us to feel love for them, and to feel their love for us, they empower and ensoul us in the process. They are living symbols of the love and soul that they have empowered us to feel and take care of.

Does a dog have soul?

Which is why, one of their chief gifts is to remind us of our soulfulness. Undoubtedly. And in caring for a dog’s needs, in a very simple way, their food and water and walks and playtime, we are also in the process caring for our own souls, and for the souls and hearts of the world too.

Haubner’s guru, Joshu Sasaki Roshi, was a deeply flawed human being, a humbug and by all accounts sexual predator. But like any flawed father, how can one, how could he, not love a human creature who could empower him to feel and to love in the way that Sasaki Roshi did?

Sasaki Roshi was also Leonard Cohen’s guru. In an interview, Cohen talked about his relationship with the man in these word:

“The core of the relationship that is possible with Roshi is a very instructive one. You know he’s both the friend and the enemy. He’s just what he is. An enemy to your self-indulgence, an enemy to your laziness, a friend to your effort. He’s going to be cunning, he’s going to be charming, he’s going to be lovable, he’s going to be deceptive. He’s going to be all the things that he has to be to turn you away from depending on him. And finally you just say: You know, this guy is absolutely true. He really loves me so much that I don’t need to depend on him. His love is a liberating love, his company a liberating kind of company. He’s only interested in you making an effort to be yourself. That’s very helpful kind of friend. And that’s a kind of friend we should be to each other.”

Similarly, that’s the kind of parent, guru, therapist dog-daddy we should aspire to be.