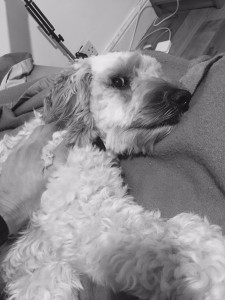 In the album released a few weeks before he died in November of this year, Leonard Cohen sings on the final track:

In a way, any koan work is an attempt to establish a treaty between ourselves and the world. But there needn’t be a treaty, Max has taught me that, Mu has taught me that. As has the specificity of this moment, me typing these final lines on a Saturday evening perched on the edge of the bed, you Maxi snoozing next to me, some warm tea and few biscuits warming my belly, before I stroll over to B&Q to buy some Orchid fertiliser and then back home to make a fish pie and settle in for the winter and the end of another year, another sentence, another book.