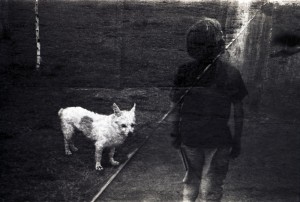 Every morning Max tests the spatial dynamics of Mu.

At various points on the Queensbury Park track around which I coax him to follow me, he stops and watches me pushing on ahead. One hundred metres, two hundred, three. Sitting, watching, as I shrink for him, and him for me, ever further into the distance. Eventually, one of us relents. Either he does in resuming to follow, or I stop, turn, blow the whistle, hold up a bag of diced liver above my head enticing him back.

When he is once again by my side, I reward him for honouring our attachment, our you-me-yes-bond by returning from the wilderness of Mu, of No.

Perhaps he carries out this manoeuvre simply for the liver. He must know by now that if he holds back, at some point I will attempt to inveigle him to return by offering treats. I would prefer to believe the transaction is a more subtle one, that there is something about the distance and detachment of his primary attachment figure that offers him a scenario which is both a little scary, as well as independence-forming. And so, he sits and waits and watches just how far I’ll go before I turn around to notice he’s gone, or how long he’ll be able to hold out.

We are both teetering on the very edge of Mu (in my case, the abyss, for this, even after a few months living together, is how it would feel  to lose him, why I worry the longer he holds back), seeing if we can tolerate the feeling, as well as enjoying the dopamine and liver rewarding rush of reconnection when in response to my whistle and a hand held aloft like a ref above my head, he comes dashing back across the gulf opening between us, and once more, we are reunited.

For the last few mornings, after having got us home, towelling him down and breakfast for both of us (me: toast and honey; Max: fish and rice kibble) I have opened my laptop and spent some time just looking at Mu, the pictograph that is, tracing the historical forms of the character Mu/Wu from the earliest incised ancient Chinese characters found on oracle bones from Bronze Age China (14th – 11th centuries BCE) right through to the more ornate seal script a thousand years later, to the modern Han character used to denote the term today(無).

Might it be possible to actually see the frustrating obstacle, snag, or stoppage that lies at the heart of the word in the word, as it has been represented for millenia, itself?

Frustration: from Latin frustrat- ‘disappointed’, from the verb frustrare, from frustra ‘in vain’.

Most moving, I think, are the earliest depictions, chiselled on ox shoulder-blades or the flat under-part of turtle shells. These oracle bones were used to answer koan-like questions through divination at the court of the royal house of Shang which ruled central China between the 16th and 11th centuries B.C.

When I look at the pictograph, I see two arms-outstretched figures hankering for something (love, connection, understanding, knowledge of some kind?) and between them a wishbone-shaped obstruction. Maybe it’s a wall, or a stream, a parental figure (a la Romeo and Juliet?) or some other kind of restraining third. Whatever it is, they’re blocked in getting what they want.

A later pictograph of Mu suggests either some form of linkage in the top through another intermediary (a meeting of minds through poems, stories, the internet), or maybe just a more active pushing apart of the two figures.

This becomes more apparent as the pictograph develops into Small Seal script in which I I read, with the whimsicality of the Rorschach test, a more hierarchical, even socially-intruding divisiveness. This is Mu rendered at the level of Orwell’s Big Brother.

The modern Chinese character obliterates the dyadic struggle altogether, hiding it perhaps, in a pictograph that resembles to my eyes the window and bars of a prison cell. The final endpoint of Mu? The Gateless Barrier.

This is what looking into the sealed room of the Mu koan, or out from the inside of one’s frustration might look like. Mu as a safe deposit box for which we don’t have a key, which also begs the question: what is being deposited there, and why can’t it be stored in a more accessible place? Or alternatively, Mu as something outside ourselves which we yearn to have access to, but don’t know where to start.

When a potential patient requests a modern dokusan, a therapy consultation, in the hope that I might become a kind of Zhaouzhou for their quest, they often present their frustrations in the form of a koan. The hope being that I will give them a solution, or the potential for solution, something, anything to free the existential hinderance. Or at least suggest ways in which we might find entrance and portals through which they can move freely again.

We call these our “therapy goals”, but they are koans through and through. Here’s a random sample:

1.    Why can’t I stop acting out in painful ways towards friends, family and partners?
2.     Will I ever be able to have a loving and trusting relationship with my girlfriend/boss/parent?
3.     Why do I have this recurring idea that I will fall apart and not be able to cope if too much pressure is put on me?
4.     How can I feel positive and confident about the future?
5.     How can I address my outbursts of anger and the desire to cut myself?
6.     How can I heal the wounds that I experienced as a child?
7.     Will I ever be able to stop feeling inadequate especially when it’s not justified?
8.     How can I  stop being afraid of doing things, stop preventing myself from doing the things I need to do, stick to plans, stop making excuses?
9.  How can I reduce my alcohol consumption/my Netflix addiction/my pornography habit and live clean?
10.  How can I change even though some parts of me fear the outcome if I did?

My function at this point, I believe, is to be the bearer of hope, to say: “Yes, I believe we can” to their how-can-I, or will-I-ever-be-able-to questions.

Also: perhaps to have some plan for how to discharge this hopeful enterprise. Am I doing them a disservice by not being more explicit about Mu? Not sharing with them the likelihood that our journey together will also take us, Dante-and-Virgil-like, down a number of Mu-shaped blind alleys, road blocks, and at times one or two hellish-seeming impasses?

Are therapists of a certain stripe (CBT?), not wanting to put off people from joining us on this soul-quest, this dokusan, doing a Rosencrantz and Guildenstern on our clients’ Hamlets? An ever-positive, somewhat simplistic reframe of their interesting, quest-provoking koans?

HAMLET: What have you, my good friends, deserved at the hands of fortune that she sends you to prison hither?
GUILDENSTERN: Prison, my lord!
HAMLET: Denmark’s a prison.
ROSENCRANTZ: Then is the world one.
HAMLET: A goodly one; in which there are many confines, wards and dungeons, Denmark being one o’ the worst.
ROSENCRANTZ: We think not so, my lord.
HAMLET: Why, then, ’tis none to you; for there is nothing either good or bad, but thinking makes it so: to me it is a prison.
ROSENCRANTZ: Why then, your ambition makes it one; ’tis too narrow for your mind.
HAMLET: O God, I could be bounded in a nut shell and count myself a king of infinite space, were it not that I have bad dreams.Without our bad dreams, the CBT therapist believes that could all break free from the (illusory?) shackles of Mu.

The last line of Hamlet’s makes me think of those millions of liquid-filled pods in the Matrix, in which the unsuspecting human race now exist, trapped and pacified in a collectively-dreamt simulation of 20th century life, when in fact, they (we) are existing in suspended animation, nothing more than a bioelectric “crop” for the giant machines that now rule the world.

Our koans, you might say, are these collective bad dreams. Uncomfortably waking us up, as Keanu is uncomfortably woken after taking the red pill to realities we’d rather not look at; prodding us out of self-delusion into a kind of reckoning. But with what? And on the other side of this reckoning, what awaits us?