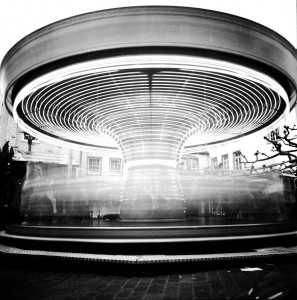 Life feels rich and exciting when it feels generative. This is why love stories, like those that work on First Dates, have such an incredible propulsion to them. Two people, travelling along their own trajectories, meet. And in this meeting, their life-propulsion becomes exponential, gathering force cumulatively.

This exponential generativity may involve all sorts of scenarios: fucking and house-buying and dancing all night at All Tomorrow’s Parties festivals. It may involve producing a third, a wholly separate and new life form. But before and after all this generativity, there will be times when nothing much happens, when a kind of life-denying entropy reigns, when who we are, and what we’re about feels stuck in a rut, the ruts often consisting of safety grooves from which we’re unable to shift.

So might one of the benefits of Mu be this ability to shake us from existential entropy? Other than certainty-shaking koans, Mu pops up everywhere in this capacity. Mu is the field of bluebells on Stanmore Common, far as the eye can see on, that Max and I weren’t expecting to find the day we went for our first walk together there. Mu is the nettle rash on his back legs, the uncomfortable hour he spends skittering around the flat when we get back home, kicking his legs back behind him against the pain and irritation, unable to settle. Mu is the unexpected word or phrase or idea that I hear myself saying in a therapy session, or from the mouth of a client.

And why not universalise that story of Mu-getting-us-out-of-a-rut?

For a billion years, or more, what does it matter when we’re counting with such hulking numbers, the only life form that existed on this planet were single-cell bacteria, microbes, which we now call prokaryotes. The smallest life-form possible, though still able to causes diseases, communicate to each other, eat crude oil, conduct electrical currents and draw power from the sun. But for all this, lacking the DNA-stuffed “command centre” nucleus and battery pack mitochondria required for even algae and fungi to come into being, let animals and creatures like us. Everything that makes up the world around you requires these more complex eukaryotic cells, which for a billion years didn’t exist. Possibly because they were stuck in an energy-rut. To become complex, cells need the stable, distributed energy supply that only mitochondria can provide. Without these internal power stations, prokaryotes, for all their evolutionary ingenuity, would be required to always stay as single, simple cells.

Thus Life with a capital L, you might say, was stuck in a prokaryotic rut for a very, very, very long time. And then one day, by chance, with one Mu-like meeting, or as Nick Lane describes it “a single chimeric event”, that happened just once in three billion years, and never again, everything changed.

What happened was that two prokaryotes, an archaeon and a bacterium managed to merge, and from this singular endosymbiosis, the inner prokaryote mutated into a energy-productive mitochondria which could then power this two-in-one cell into ever greater complexity.

The “singular endosymbiosis” as Nick Lane describes it, is also a nifty way to encapsulate the internalisation of Mu, and what occurs I think when we begin carrying around this very simple koan in our lives from day to day, how it enlivens and vitalizes our simple, dualistic encounters with experience (like/don’t like; yes/no; approach/avoid) and provides an energy source for us to encounter life through a richer, more complex lens.