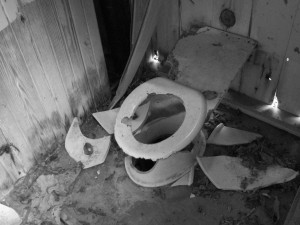 Mu seems to sting the most when it comes up against a heterotelic desire, when the utterance (written, spoken) is designed to make someone feel a particular way about you as the utterance-maker as opposed to some intrinsic, autotelic need to utter, or make meaning of something.

Perhaps this is what the master-disciple koans are trying to tell us over and over again. Which is why if the question arrives at the ears of the Master encapsulated in the vehicle of ego, his response (Mu being the most succinct of all responses) will seek in some way to flush out the ego-enforcement, the defence-mechanism which is being powered along by the engine of a hidden need. Although the guru’s response might come across as somewhat strident and severe, perhaps the page’s failure to render the tone of the exchange means that there might be more warmth and humour in these ego-liquidating interactions than we might impute.

The guru (or therapist) goal you could say is to get us out of a heterotelic bind. How to do this, and can we do it for ourselves.

If the heterotelic, Freudian Super-Ego is forever exerting pressure on the autotelic desires of the Ich (the I, or Id)  in a somewhat overbearing, extrinsic, one-upmanship fashion then you can see how we might need another part of our psyche, or someone else, to play the tricky intermediary role of mediator, to help us get out of our heterotelic bind. Freud calls that part of us, the Ego. When I’m working with clients, I refer to Ego in the plural as Protectors or Managers.

Whatever you call them, the role of Ego is a very delicate and difficult one, with our inner Egoic Protectors and Managers often feeling like they’re being placed into some kind of frustrating intrapsychic piggy in the middle position. The only way these Protectors or Managers feel they can deal with the almost impossible bridging of these conflicts or power-struggles, is to generate different kinds of coping behaviours in order not to be crushed by the demands of the Inner Parent, or the needs of the Inner Child.

These defences or coping strategies leak out in the smallest of our relational manoeuvres, in the simplest of our interpersonal utterances. This is what I think I mean when I say that the core need of the disciple, or the client, will often be presented in an egoic (Protective or Managerial) vehicle. Zhaozhou or Freud might say that our job is to locate the core need clinging desperately to the undercarriage of this pumped up 4 x 4 vehicle.

I remember the first time I saw Rakim outside my therapy room. I was on the pavement bringing the dog back for a walk, and he was looking for parking on the road outside for our session that was to start in the next ten minutes. Rakim, a slight Indian man, was sitting in a giant, white, Nissan X-Trail Four Wheel Drive SUV, the car completely dwarfing him to the extent where he looked like a very small and vulnerable child being carried along inside the automobile equivalent of a tank.

Freud, who stands in our culture as a kind of Sherlock Holmes figure for seeing the child’s need inside the adult’s defence, was the first to present us with a catalogue of these heterotelic ego binds, which he called ‘defences’.

But Freud is not so good on telling us how to get out of them. For him, the supposition is that once these unconscious knots and conflicts become known and understood, we can then simply find a way to undo the knots that bind us, or accept those we struggle to disentangle completely. Don’t we need more help with this than blind Freudian faith?